Police Car Crusher Roger Pion Out of Jail, Has No Regrets 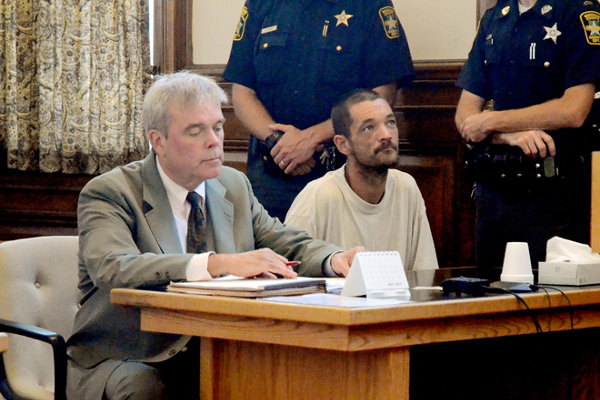 Roger Pion, the self-employed Vermont farmer who drove a 20,000-pound tractor over seven police cars in early August, was released August 30 after four weeks in jail. When asked by a Fox 44 news reporter if he had any regrets, the taciturn Pion said, “No.”

Pion (pronounced PEE-on) has become something of an Internet folk hero since he used his father’s tractor to crush five Orleans Sheriff’s cruisers, an unmarked car, as a van. News of his release on the Fox 44 Facebook page drew 75 “likes” within a day. The Associated Press reported he left “the Northern State Correctional Facility on Thursday with a smile on his face,” a story that was picked up by the Washington Post and New Orleans Times-Picayune, among others.

Asked what he was going to do after his release, Pion said, “Go home.” Asked if was okay in jail, he said, “Yeah, it was all right – for jail.”

Pion’s dramatic protest has received national and international news coverage, as well as worldwide support for his legal fund. His bail was set at $50,000, which he met soon after being jailed. However, authorities held him longer on an unrelated charge of disorderly conduct, leading at least one state senate candidate to suggest that he was a political prisoner.

Pion has pled not guilty to the 15 charges he faces for the cruiser-crushing event, which lasted only a few minutes while Sheriff’s dept. personnel sat unaware in their office a few feet away. Seven of the charges against Pion are for property damage to each of the sheriff’s cars, but his attorney David Sleigh thinks that is over-charging.

Sleigh’s argument is that there was only one event and the charge should be the same regardless of the number of damaged cars. As far as charging goes, Sleigh argues, there was only one occurrence, a theory he says has a strong legal basis.

Sleigh is also working to get the most serious charge, aggravated assault, dropped. Pion did not cause any personal injuries and, Sleigh says, had no intent to harm anyone. During the cruiser crushing, Pion actually moved at least one private car out of harm’s way.

While he is free, one of his conditions is that Pion may not drive any vehicle, including a tractor. He was released into the custody of his father. His next scheduled court date is October 2.

In a TV interview hours after his release, Pion spoke briefly of his mistreatment in jail. He said that people put “stuff in my food,” that guards went through his cell whenever he left, and that he “spent the last of my time in the hole.”

Pion is soft-spoken and terse in interviews. He says he does not think of himself as a hero, but there is a Facebook page called “Roger Pion, the Magnificent" and his supporters in northern Vermont are planning a rally, picnic, and music event for late September.

Pion’s actions seem to have tapped into two strong underground currents in American culture. One is the anti-authoritarian strain that resents police and other authorities and sees the crushed cruisers as a form of revenge.

As one poster expressed it on the Fox 44 Facebook page, “our cops… harassed Roger, have done it to so many who do not deserve it… it's why Roger did what he did. No one else would listen so he took matters into his own hands and guess what? He finally got people to realize how screwed our system is.”

The other cultural current relates to Pion’s arrest for marijuana, which many supporters see as police state activity that should be resisted because, they argue, the drug war is a failure and marijuana should be legal.

Roger Pion, an unlikely folk hero indeed, has gotten worldwide attention due to his actions, which have triggered considerable support for him as well.