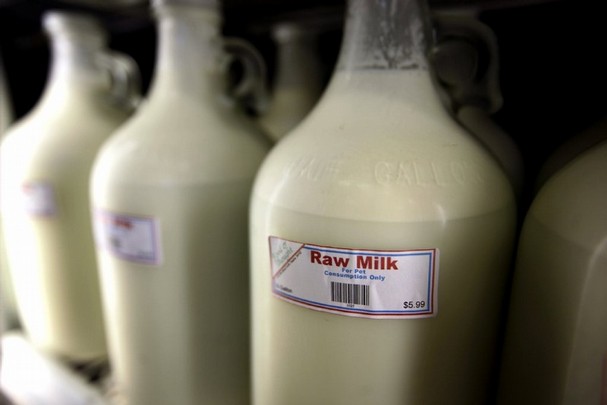 Forget 'crying over it,' the way federal health officials portray the potential health risks of unprocessed milk might have some scrambling for a HazMat suit and respirator if faced with an overturned glass. However, a new study puts into stark relief the disconnect between the government who says: “raw milk, unconscionably bad,” and raw milk consumers who categorically respond with: “but its good for me”.

That there is a segment of the American population which actually prefers to drink milk in the raw continues to frustrate some health officials. What's even more vexing for officialdom is that the vast majority of raw milk consumers don't seem to care what government food safety experts have to say about the risks associated with any of their dietary choices (in spite of several federal agencies' best educational efforts).

This, according to a survey of raw-milk-regulars published in the March issue of Food Protection Trends. Out of 56 raw milk proponents who responded to a Michigan State University questionnaire (an admittedly small sample), 52 said they don't trust health officials' food safety recommendations.

"This lack of trust casts doubt on whether or not consumer education by local or state health departments would be effective in preventing milk-borne disease due to raw milk contamination," conclude the authors of the study.

But don't be too quick to dismiss these views as the collective opinion of “simple folk”. The milk survey revealed an intriguing profile of the average dairy-daredevil – that of a young (around the age of 29) college educated suburbanite.

The federal Centers for Disease Control recently interpreted published data in a way that maligns raw milk. Officials hypothesize that it is the culprit behind the majority of illnesses associated with milk-related disease outbreaks in the U.S. But this news most likely wouldn't have swayed survey participants who cited support for local farmers as the number one reason for their raw milk preference.

Offering anecdotal opposition to federally funded studies, raw milk consumers often claim that unpasteurized, un-homogenized milk is simply more nutritious than its processed counterpart and that it helps reduce the risk of digestive disorders and allergies. This attitude was reflected in the MSU survey as well as a 2010 University of Wisconsin study.

Raw milk sporadically makes national news as health scares “related” to the product come and go. The latest occurred last fall at a raw milk dairy in California – the largest raw milk producing state. After Organic Pastures Dairy was forced to undergo a recall and quarantine because three children who consumed raw milk from the dairy came down with E. Coli poisoning, scientists from California's Department of Food and Agriculture were unable to detect the strain of bacteria that infected the children in any of their lab samples. Samples from milk actually consumed by the children also came up negative.

The FDA has banned the sale of raw milk across state lines under the Constitution's Commerce Clause. Intrastate sales of raw milk for human consumption have been outlawed in 23 states.

From 1998 through 2008, the CDC reported 1,676 illnesses related to the consumption of raw milk or raw milk products. During the same period, pasteurized milk was blamed for 2,494 illnesses and four deaths. There were no deaths associated with raw milk consumption.