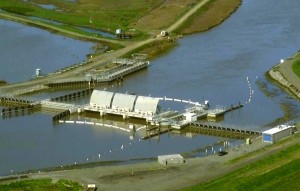 Republican Congressman Devin Nunes from the 21st District in Central Valley is sponsoring HR 1837, the Sacramento-San Joaquin Valley Water Reliability Act.  It would completely redo existing agreements on how to use water from the Sacramento Delta.  That thunder you hear in the distance is the sound of howitzers and heat-seeking missiles being launched by the various players at the other players. The Sacramento Delta is ground zero for California water wars, and HR 1837 promises to be a major battle.

HR 1837 seeks to redirect some of the water from the Sacramento Delta to the Central Valley.   He says that previous water allocations have taken water away from farmers there, causing hundreds of thousands of acres to go fallow, and the loss of thousands of jobs as well. Further, a “man-made drought” similar to 2009 may force 10% water allocations to agriculture, all to save the three inch Delta smelt whom Nunes is clearly not sympathetic towards.

Basically, the Nunes bill seeks to overturn the 2009 San Joaquin River Restoration Act sponsored by California Sen. Dianne Feinstein and return to the 1994 Delta Bay Accord. Calwatchdog, who favors the Nunes bill, has a detailed explanation as well as history. As an example of how convoluted the water wars get, one of the major battle fields here is Central Valley agriculture vs. commercial salmon fishing, sport fishing, and related real-estate interests. Agricultural interests may have bought their water rights decades ago while fishing interests may have never bought rights at all. Thus, determining who gets the water and why becomes complex indeed.

As might be expected, northern California members of the House are vehemently opposed to HR 1837; saying it would gut environmental controls, lead to job losses in their areas, and hurt tourism and fishing. They believe it is a brazen attempted water grab by powerful agricultural interests.

If Nunes is defending his district, then these representatives are certainly doing the same with their districts. The unpalatable truth is that both sides are quite correct. Diversion of water elsewhere will financially hurt their areas. There are too many people fighting for too little water and there simply isn’t enough to satisfy everyone. Agriculture is a big part of the California economy. But so is tourism and fishing. Everyone seemingly wants consensus - as long as their interests don't get hurt. One solution is to charge more for water, as that will drop demand. Another is conservation, which includes the realization that lush green lawns and golf courses in semi-arid areas and deserts may simply no longer be tenable.

HR 1837 has passed a House committee. Obama is threatening a veto. The bill may be trying to shift the debate by taking an extreme position, even if it fails now. But make no mistake; HR 1837 has exposed the deep, underlying divisions in how Sacramento Delta water is portioned out.