Another presidential primary takes place today, this time in the independent-voter rich state of Florida.  According to a survey from the Pew Research Center for the People and the Press released Monday, the number of Republican and Republican-leaning registered voters unimpressed with their party’s presidential field has risen since early January. In less than a month’s time, those rating the field as “only fair or poor” went from 44% to 52%. 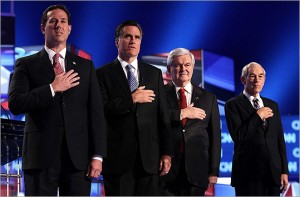 Pew asked voters the following question in a survey conducted January 26-29 among 1,006 adults, including 341 Republican and Republican-leaning registered voters:

“Overall, what's your impression of the candidates running for the REPUBLICAN presidential nomination? AS A GROUP, would you say they are excellent candidates, good candidates, only fair candidates or poor candidates?”

Only 46% of Republican voters have positive opinions of the GOP field. By contrast, these results are also a reversal from Pew’s survey at the beginning of January before the New Hampshire primary. A majority 51% gave the field excellent or good ratings, while 44% rated it as only fair or poor.

Even more alarming to Republican leadership is that this isn’t the first tangible sign of trouble. In the beginning of January, a CBS poll of Republican voters found a similar sentiment.  A majority- 58%- said they wanted more candidate choices, up 12% since October 2011. An even higher percentage of voters, 71%, wanted more choices in June 2011.

Beyond its main goal of defeating President Obama, the Republican Party has its own problems to remedy, those that fundamentally involve figuring out how to energize the party faithful.  Media pundits propose a variety of reasons for Republicans not effectively engaging their own. I’d propose that the primary issue is the sound byte-driven media, along with most of the current Republican candidates themselves supplying the fodder.

According to a recent study of television news coverage of major news networks by the Center for Media and Public Affairs at George Mason University from January 1- January 10, over six times as many stories were devoted to the campaign horse race than the policies of the candidates themselves (105 vs. 16 stories). Additionally, with the background of the candidates taken into account, horse race coverage between them outpaced coverage of their records, personalities, and policies by a margin of over 3-1 (105 vs. 31 stories).

One can’t help but wonder if, with the so-called Republican frontrunners attacking each other more than focusing on essential issues, Republican presidential candidates aren't causing their own downfall.  Today’s Florida primary may be a closed one, but that doesn’t mean the the state’s independent voters won’t be closely watching the buzz surrounding the process. Perhaps the Republican candidates ought to keep this in mind, especially with much more of the electorate weary of partisan rhetoric.

Christopher Guzman majored in Political Studies with an emphasis in American Politics at the Master's College. He's written for Religion News Service, Human Events, Cybercast News Service, and has also been published in USA Today. Christopher leans libertarian. He especially enjoys following how the internet plays a major role in enabling underdog political campaigns and in arming voters to challenge the status quo.