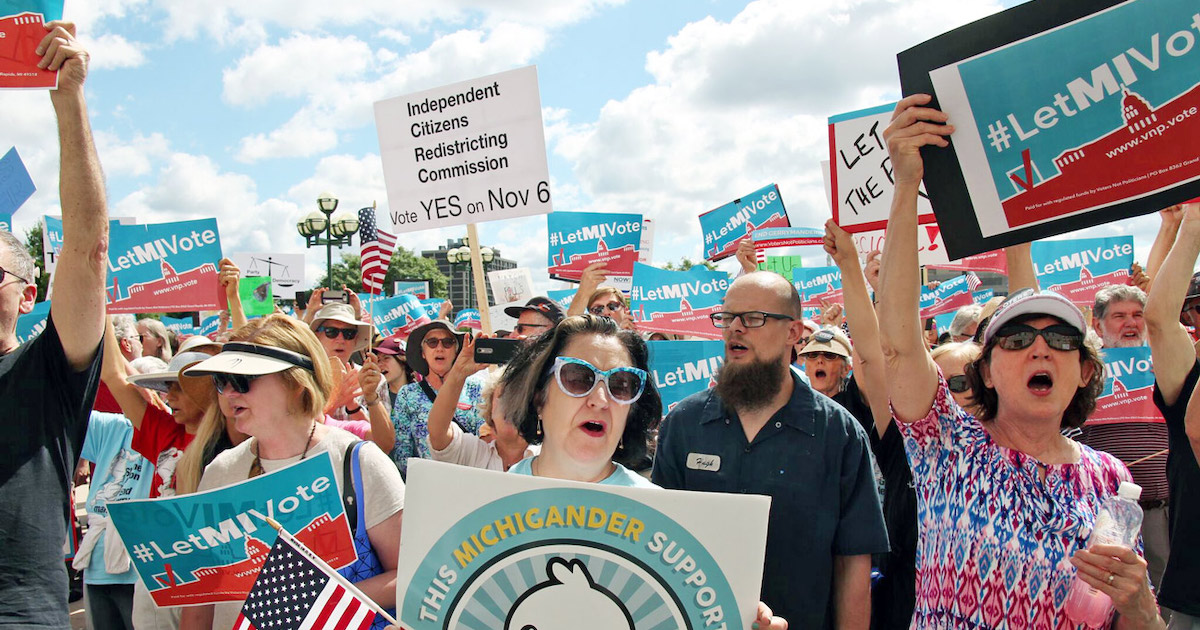 Update 8/20/19: Michigan Attorney General Dana Nesse filed a brief in federal court on Monday, August 19, asking the judge to drop a lawsuit filed by 15 Republican politicians, lobbyists, and residents over a voter-approved citizens’ redistricting commission on which they are ineligible to serve. She argued that despite plaintiffs’ claim that these restrictions on eligibility violate their First and Fourteenth Amendment rights, the rules are “no different than excluding people from jury duty who have a relationship to the parties or have a stake in the outcome of the case.”

The 2018 elections were monumental for election reform, especially independent redistricting efforts. Voters in 4 states passed amendments to end partisan gerrymandering in their state through an independent / citizens' redistricting commission.

But the fight in a couple of these states wasn't easy.

WATCH: 4 Campaigns Discuss How They Terminated Gerrymandering in 2018

In Michigan, for instance, GOP insiders and affiliated groups sued to remove the anti-gerrymandering amendment, Proposal 2, from the November ballot. Proposal 2 established a 13-member citizens’ redistricting commission to draw electoral maps. The commission will be comprised of 4 Republicans, 4 Democrats, and 5 citizens registered outside the political parties.

It was the first proposal ever to give independents more seats at the table.

The Michigan Supreme Court ruled against the lawsuit, and Proposal 2 went on to be approved by a large majority of voters. However, it looks like it will go before the courts yet again.

The Economist reports that "15 Michigan residents—shepherded by an affiliate of the National Republican Redistricting Trust, an organisation positioning the Republican Party for district-line drawing in the coming decade—are suing to stop the commission in its tracks."

The amendment created by Proposal 2 also has special rules for who can and cannot serve on this citizens' redistricting commission. It "bars anyone who has, in the last six years, sought or held elected office or served as a lobbyist or an insider for a political party. Their parents, children and spouses are barred from service," writes The Economist.

Plaintiffs, all of whom are ineligible to be on the commission, say this violates the rights of free speech, association, and equal protection for many Michigan residents. Funny how equal protection in elections is only a concern when it is their members.

"Anthony Daunt, a Republican lobbyist who has served on the governing body of the Michigan Republican Party committee; Kathy Berden, the GOP’s national committeewoman; Patrick Meyers, a political consultant; and Mary Shinkle, once a staffer for a Republican congressman and now a county Republican Party official."

“It’s no surprise that politicians – who directly benefit from drawing their own election maps and choosing their own voters – want to undermine the voice of voters again,” said Jamie Lyons-Eddy, director of Campaigns and Programs for Voters Not Politicians, the campaign that got Proposal 2 on the 2018 ballot. “We’re confident that the proposal will survive any and all legal challenges, just as it did from many of these same politicians on the way to the ballot.”

Lyons-Eddy called the lawsuit a “last ditch” effort by politicians to hold on to power.