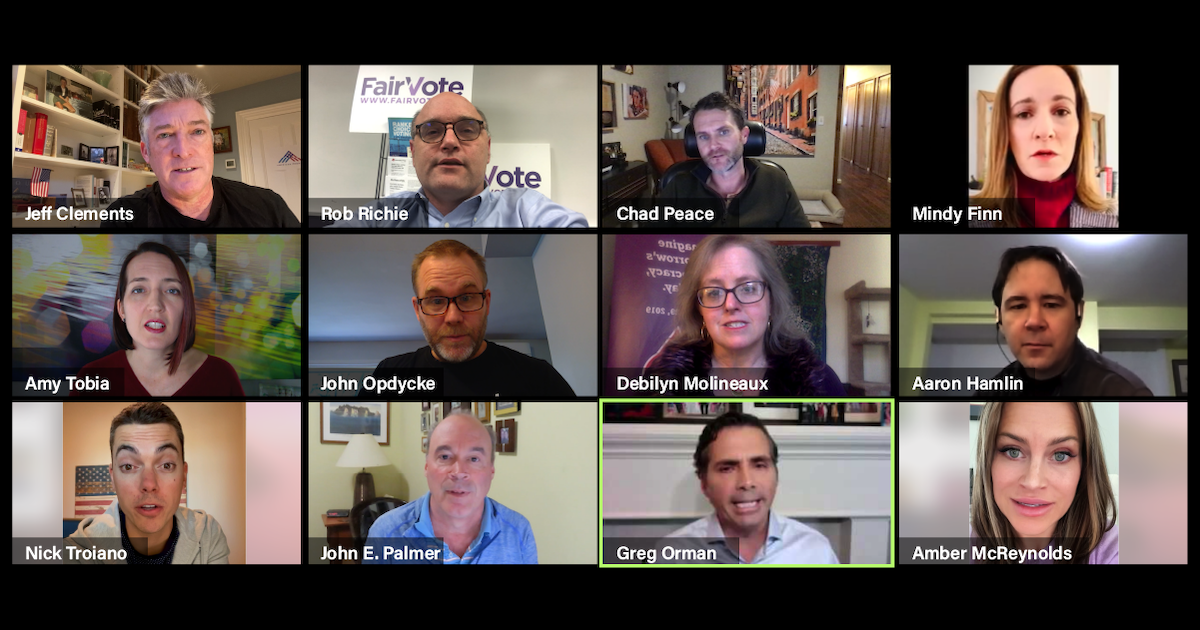 US voters and reform practitioners had an opportunity over the weekend to wrap up 2020 celebrating the success of historic proposals for better elections and discuss future endeavors to give the American people a fairer, more empowering, and more accountable political process.

Leaders in the nonpartisan reform space gathered together Friday and Saturday for the National Association of Nonpartisan Reformers’ virtual conference, “Winning Reforms: Wrap Up & Gear Up for 2021.” The event featured panel discussions and breakout activities to dive deep into the momentum-building victories of 2020 and what reformers will work on in 2021 and beyond.

Former Kansas independent gubernatorial candidate and entrepreneur Greg Orman and NANR Honorary Co-Chair Katherine Gehl kicked off the event welcoming members and non-members of NANR to the event and to the movement. They started by highlighting the important work NANR members have done leading up to the event.

“By every measure NANR members are doing important work and they are doing it well,” said Orman

"In this unprecedented year they also went above and beyond to help ensure a free and fair election that seemed to be under attack almost daily. In the process, they helped our nation achieve the highest voter turnout percentage in 120 years with more voters participating in the process than any other time tin our nation's history."

Orman then turned the segment over to Katherine Gehl, who literally wrote the book on the political industry and the need to pursue political innovation to bring real competition to the electoral process. Her work with Harvard Business School professor Michael Porter, dating back to a 2017 study, has been credited as an important catalyst for recent reform success across the country.

The reality, as Gehl and Porter's work observes, is that public officials do not have to truly compete for voters as a result of the control the two-party duopoly has in the US political industry; thus, they have no incentive to listen to what voters need and want, and therefore have no incentive to compete for voters' approval. Their incentive is to listen to the party leaders who have the most power in the process.

Gehl recognized that NANR’s members are succeeding in their efforts to flip the script on the two-party duopoly. The 2020 elections were another step toward the type of voter-centric political process Americans long for.

The NANR conferenced focused on these monumental achievements in 2020, including:

Siegert and other campaign leaders discussed the lessons from the campaign trail, what worked and what didn’t work, and what prospects 2020’s successes have for future reform.

Yet, as Orman pointed out, there were signs of optimism even with the reform campaigns that fell short of victory. In Massachusetts, for example, though a statewide proposal to implement ranked choice voting (RCV) didn't get enough votes to pass, nearly 1.6 million people voted for it. This is far more votes than any RCV proposal, to date, has garnered in the US.

In Florida, 57% of voters said yes to an amendment that would implement nonpartisan open primaries for state executive and legislative elections. To put it another way, 5.8 million people voted in favor of primary reform. In any other state, the amendment would have passed with overwhelming support.

"Think about that," remarked Orman. "Between Massachusetts and Florida, two efforts where we didn't prevail, over 7 million of our fellow Americans acknowledged that we can and must do better as a nation."

Friday’s activities also featured speeches from NANR board members and prominent figures in the movement, who discussed organizational updates, long-term campaign strategies, and key factors to strengthening the democratic process for voters.

Topics ranged from nonpartisan data analysis to the major fronts reformers will be focused on in 2021 to money in politics to the need for more diverse representation in the reform space to alternative voting methods like ranked choice voting and approval voting, both of which saw success in 2020.

Citizen Data CEO Mindy Finn, for instance, discussed what 2020 data tells us about how the reform movement did in a year in which a pandemic made it more challenging to effectively campaign and turnout voters. She offered critical insights into:

Open Primaries President John Opdycke discussed why ending partisan control over primary elections was an important step to transforming the political process into one that puts the interests of voters above the interests of private political parties. Not only that, he said it was critical to resolving divisions within the electorate.

National Vote at Home Institute CEO Amber McReynolds also discussed the key role election administrators play in a stronger democracy. In a year that presented unprecedented challenges in the administration of elections, she said, elections officials and half a million people who worked with them put their lives at risk to ensure a safe and secure voting process for others.

McReynolds expounded on the expansion of vote-by-mail in most states across the country, the impact it had on record turnout, and what it means for the future of making voting easier and more convenient for citizens across the country while maintaining and improving the integrity of the electoral process.

Each of these speakers showed just how expansive the movement for better elections is in the US and its potential and need for further growth.

Preparing for 2021 and Beyond

Friday’s discussions were followed on Saturday with a day filled with breakout sessions led by NANR members. These sessions delved deeper into campaign and communication strategies to help foster success for future campaigns, but also explored topics that don't get as much attention at the moment.

For instance, Election Reformers Network Executive Director Kevin Johnson made the case for why secretaries of state, the top elections officials in the US, should be elected in a nonpartisan manner. People often don’t think about how the person in charge of each state’s elections are elected in partisan elections or in some cases appointed by a partisan board.

Consider, for a moment, how increasingly partisan elections are becoming and the consequence that could have in a time where the legitimacy of elections are challenged based solely on what serves the interests of a single party -- or the interests of a single individual. How states administer elections, Johnson argues, is becoming more and more open to partisan abuses and self-dealing -- similar to other areas of the US political process.

There were also discussion groups, webinars, and workshops on:

Together, the sessions demonstrated the fact that there are a myriad of issues at every level of the US political process that need to be addressed, from the way primary elections are conducted to how electoral districts are drawn to how we vote for public officials, to combating political corruption, and more.

NANR's members don't focus on the same reform proposals. However, they all understand that there isn't a silver bullet to fix US elections; thus, they continue to foster new collaborations to implement comprehensive, omnibus proposals.

What unites these groups and individuals from across the political spectrum is the shared perspective that voters deserve fairer elections, accountable representation, and greater competition in the political process. And, they continue to do the necessary work to make it happen.

"NANR organizations are building pathways to real representation, empowering voters, and enfranchising independents, and creating the conditions in our political environment for a thriving third force that doesn't view our country through the lens of red or blue, but rather believes that our democracy can be renewed through innovation and genuine competition to deliver better results for the American people," said Orman.

Want to know more about the National Association of Nonpartisan Reformers. Check out the coalition's website here.