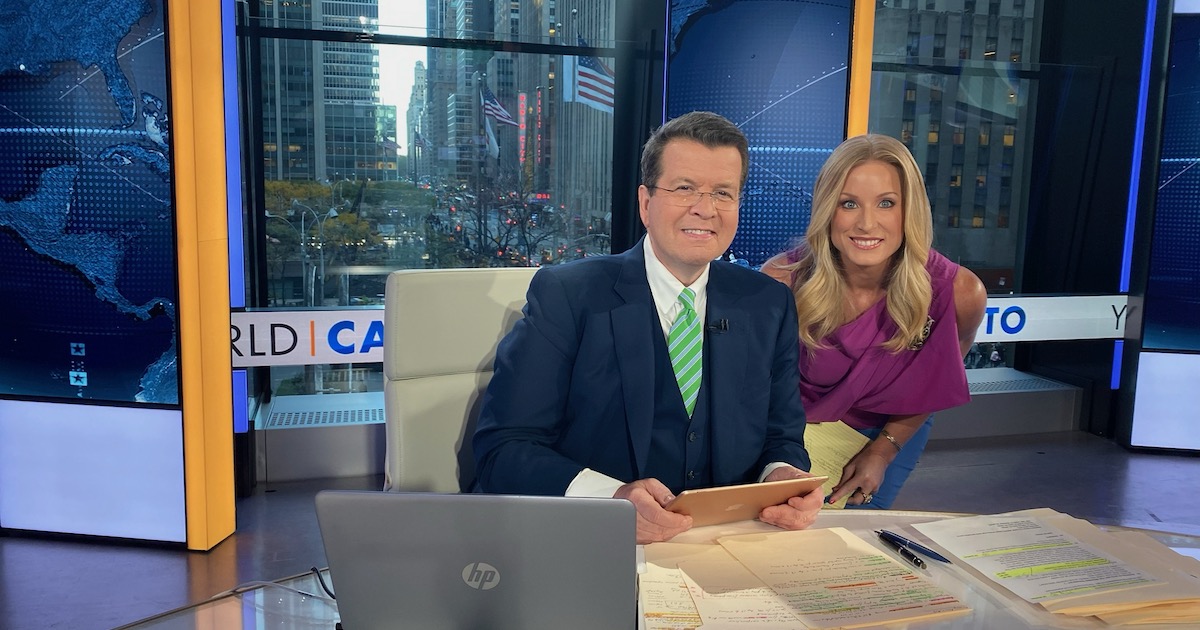 Laura Fink is an up-and-coming TV news pundit. She isn’t offended by the “talking head” label, which can carry negative connotations, but certainly would prefer “political analyst.”

She agrees to meet and discuss the dubious current and future states of TV news. We’re not going to talk about specific issues of the day. Rather, the focus will be on the process of news presentation itself.

She doesn’t keep track but guestimates the number of local and national TV news appearances she’s made is “kissing 1,000.”

Maybe you’ve seen Fink on San Diego news programming during the past half dozen years. The Wellesley College graduate and founder of Rebelle Communications has offered commentary about elections and other weighty issues on the local ABC, NBC, CBS and Fox affiliates.

You might also recall that in 2013, Fink was the second of more than a dozen woman to come forward with sexual harassment allegations against San Diego Mayor Bob Filner. As a result of that collective outpouring, Filner was forced to resign.

Though hardly a silver lining, it was Fink’s composed appearance on KPBS-TV discussing her interaction with Filner, who was her boss at the time, that got her noticed by local TV news producers.

CNN took notice, too. In the moment, she went on that national cable news channel to talk about Filner’s repugnant manners with women.

A staunch progressive who primarily works on Democratic political campaigns, Fink doesn’t get as many show requests yet from the left-leaning national news outlets — CNN and MSNBC — as she does from those on the right.

Counter-intuitively, it’s more often Fox News, Fox Business, locally based One America News Network and until recently, Newsmax, that call on her to offer the liberal counterbalance to prevailing conservative viewpoints.

Why would she participate in that?

Part of it has to do with opportunity, Fink says.

Fink knows there are those on the left side of the political fence who won’t do Fox TV because they condemn the network’s bias. And see it as a factor that’s eroding democracy.

“I have a political approach to doing it,” she says. “I want to see strong liberal voices on the network, and be one of those voices. I’m pragmatic about it. Progressives have to get good at engaging. If the deck is stacked, we still have to thread the needle and communicate well.”

Along with die-hard conservatives, Fink believes that there are also “persuadable people” watching Fox.

“I think about all the women who listen to Fox news, and maybe that’s not their choice,” she says. “Even though the show is set up as two-on-one basketball, and the subject isn’t angled in my favor, I’m talking to those women, and trying to persuade those women whose conservative husbands may have Fox on the TV.”

It should be noted that both left- and right-leaning national cable news channels set up their shows as two-(or more)-on-one verbal jousts. Does the fact that most outlets do it make it right? Is modern punditry a useful alternative to old-fashioned news reporting?

“I feel like those are similar questions to ones I used to get asked about money and politics when I was a political fundraiser,” Fink says. “And as a fundraiser, my livelihood was dependent on raising money in the political game.”

Fink doesn’t get paid for most of her national TV appearances. Even so, I momentarily wonder if I’ve crossed a line—but, no, she’s prepared to give her unvarnished view on the current state of TV news programming.

“I would be happy to be put out of pundit work tomorrow by campaign finance reform,” Fink says. “I’d be happy for the current dynamics of head-to-head polarized political warfare to have had its day on national TV. I’m confident I can have a civilized, educated conversation about issues. But up and until then, I’m going to make the best case I can in the context that exists.”

Oftentimes, San Diego news producers ask Fink to come in as an expert to give “plain-wrapped neutral” analysis of an issue. For example, during the last election cycle she was asked to sum up certain races.

For that, she doesn’t extol the virtues of the Democrat in the race and predict they will win. “I’ll do an analysis that covers what the state of the race is,” Fink says. “The factors and the variables that play into it. How voters are feeling.”

Despite diametrically opposed world-views, the two women are a mutual admiration society.

“Wendy is incredibly difficult to go up against, in part because she’s so likeable,” Fink says. “She’s just a remarkable person. She’s a Christian and she lives those values. Wendy is an incredibly generous, wonderful person.”

Besides TV commentary, Patrick is an author, speaker, legal prosecutor and a teacher at San Diego State University. She’s a veteran of the punditry game and figures she’s done more than 6,000 local and national TV hits.

“Laura is one of the most articulate, animated commentators I have ever been paired with,” Patrick says. “She’s passionate, personable and able to discuss politics with both style and substance.”

Patrick believes she and Fink do well on TV together because their off-air friendship creates great chemistry.

“Laura is fun and funny,” Patrick adds. “Her sharp wit and good-natured humor are contagious. There’s nothing more enjoyable than mixing it up with someone who genuinely makes you smile.”

Patrick says Fink has invited her to birthday parties and inner-circle events. They even used to ride together to appearances on local Fox5-TV.

They both feel that familiarity pays off with good television.

Unlike Fink, Patrick has no desire to see talking heads swept out of news presentation. She sees pundits as playing an important role.

“I think if you take away punditry, you’ll lose audiences,” Patrick says. “Stories that aren’t conveyed with personality don’t get through as well. No, I don’t think punditry is going away any time soon.”

Coronavirus has made it harder, but not impossible, to do live TV news commentary.

Pre-COVID, there were times Fink would do in-studio hits in Fox’s New York offices. She’s made several appearances with Fox News and Fox Business host Neil Cavuto. Being in the same studio helps create that same chemistry Patrick talks about.

“I love Neil’s vibe, he’s probably my favorite show to go on,” Fink says. “He’s tough and he cuts me off plenty of times, but he generally wants to hear people out. And being in the studio with him allows us to have an actual conversation.”

During the pandemic, most of her national and local TV hits are shot at CoverEDGE, a satellite TV news services office in downtown San Diego.

The way it works: A news producer will call and ask if she’s available to talk on a topic. Sometimes there’s a few days’ notice. Other times they may want her in a matter of hours.

Even if it’s an unpaid gig, networks pay for hair and makeup services for the spot, which Fink admits she enjoys.

“Doing hair and makeup is absolutely hilarious and fun,” she says. “I enjoy the pageantry of it. And it’s part of the culture of the pundit class. One time in New York I was sitting next to (former Small Business Administration head) Linda McMahon. Another time, next to a conservative city council member from New York. Or, somebody with a hard comb-over from a right-wing think tank. There’ve been some fascinating conversations in hair and makeup.”

CoverEDGE in San Diego also has hair-and-makeup services. Fink has crossed paths there with disgraced former Congressman Duncan Hunter as well as the Lieutenant Governor of California.

After getting made up for TV, a pundit should be in the chair in front of the camera 10 to 20 minutes before the scheduled hit. There are sound checks. You touch base with whatever show producer you’re working with. There’s usually no pre-spot contact with the host.

You’ve already given the producer your talking points for the hit, Fink says. Ergo, the host generally knows what a pundit is going to say. But the host or your opposing talking head may come out of left field with questions or comments.

Some hosts are rougher, and interrupt more than others, Fink notes. “I don’t get to control it, so I have to figure out the rules of engagement based on the host’s behavior,” she says. “You have to be prepared for anything.”

It occurs to me that interrupting most TV news hosts might cause ego bruising. And is it in the back of a pundit’s mind not to try too hard to steal the host’s thunder, lest they don’t invite you back?

“There should be a baseline of civility,” Fink says. “And it’s not strategic to dominate the host. That’s a classic debate tactic. If you don’t let the other person make their points there’s nothing to rebut. You need to get a hook that you can grab at—and crush them with it.”

She says a prime example of what not to do was Donald Trump’s approach to the first Presidential debate. “You’re not winning if you’re just talking over people all the time,” she says. “Because nobody knows what you’re saying.”

Yes, Fink has been known to go on the air on Fox and make jokes at Trump’s expense.

I think I’ve had some witty retorts,” she says. “And there’s nothing like making a liberal joke on Fox News to dead air. But that’s what you get. I know I’ve done something right if they’re not laughing at the joke.”

It wouldn’t appear to be an easy road when the chirping-crickets trope is your nightly reward. Such is the life of a pundit who primarily plays in the opposition sandbox.