Up Next
...
Can Gavin Newsom Use the Pandemic to Beat Back Homelessness?
Read More 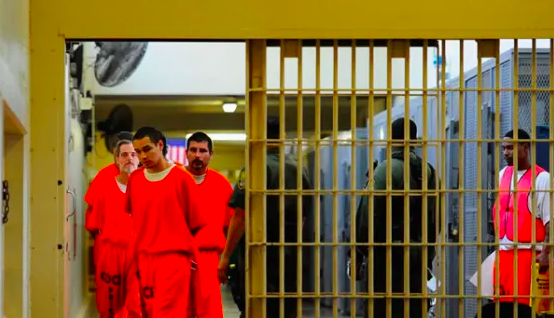 Proposition 25 would replace the money bail system. The following summaries are provided by Ballotpedia.

How does Bail Work in California?‍

As of 2019, California utilized a cash bail system to release detained criminal suspects before their trials. Suspects paid a cash bond to be released from jail pending trial with the promise to return to court for trial and hearings. The cash bond was repaid to suspects after their criminal trials were completed, no matter the outcome.[2] The Judicial Council of California, which is the rule-making department of the state's judicial system, described bail as a tool to "ensure the presence of the defendant before the court." The state's countywide superior courts were responsible for setting cash bail amounts for crimes, and judges were permitted to adjust the cash bail amounts upward or downward.[3] Suspects could post bail with their own money or through a commercial bail bond agent, who pays the full bail amount in exchange for a non-refundable premium from suspects. In California, there was no law setting or capping premiums on bail bonds. According to the California Department of Insurance, agents typically charged around 10 percent.[4][5][6]‍

What was SB 10 Designed to Change about Bail in California?

SB 10 was designed to make California the first state to end the use of cash bail for all detained suspects awaiting trials.[7][8][9] The legislation would replace the state's cash bail system with risk assessments to determine whether a detained suspect should be granted pretrial release and under what conditions. The risk assessments would categorize suspects as low risk, medium risk, or high risk. Suspects deemed as having a low risk of failing to appear in court and a low risk to public safety would be released from jail, while those deemed a high risk would remain in jail, with a chance to argue for their release before a judge. Those deemed a medium risk could be released or detained, depending on the local court's rules. SB 10 would exempt suspects of misdemeanors, with exceptions, from needing a risk assessment to be released.[1]

SB 10 would require the superior courts to establish pretrial assessment divisions, which would be tasked with conducting risk assessments and making recommendations for conditions of release. The state Judicial Council would decide which risk assessment tools are valid for use. SB 10 would not itself mandate what factors the assessment tools need to consider, but the bill would state that "tools shall be demonstrated by scientific research to be accurate and reliable."[1]‍

How did the Veto Referendum get on the Ballot?

In the California State Legislature, most Democrats (67 of 81) supported SB 10, while just one (of 39) Republican supported the legislation.[10] California Gov. Jerry Brown (D) signed SB 10 on August 28, 2018, and the veto referendum to overturn the bill was filed on August 29. Sen. Robert Hertzberg (D-18), the bill’s lead sponsor, described SB 10 as a "transformational shift away from valuing private wealth and toward protecting public safety."[11] He also said that upholding the legislation "is ground zero in the fight over criminal justice reform."[12]

The American Bail Coalition, a nonprofit trade association, organized the political action committee Californians Against the Reckless Bail Scheme to lead the effort to repeal SB 10 through a veto referendum.[13] Jeff Clayton, the coalition's executive director, stated, "The only debate we’re having right now is: Is the current system worse than the alternative? And the answer is, no, it’s not."[14] The PAC had reported raising $4.14 million through June 30, 2020. The top ten donors to the committee were bail bond businesses, owners of bail bond businesses, or companies that provided services or insurance to bail bond businesses. David Quintana, a California Bail Agents Association lobbyist, said, “You don’t eliminate an industry and expect those people to go down quietly.”[15]

California's three ACLU affiliates opposed SB 10, issuing a joint statement that said: "SB 10 is not the model for pretrial justice and racial equity that California should strive for." The statement called for new legislation to "address racial bias in risk assessment tools."[16] ACLU of North California executive director Abdi Soltani said the group would not, however, align with bail bond businesses to overturn SB 10. Soltani stated, "Make no mistake, the bail industry is not interested in equal justice or equal protection under the law, they are seeking to turn back the clock to protect their bottom line."[17]‍

If approved, Proposition 25 will replace the money bail system with a system based on determination of public safety and flight risk. It will also limit detention of a person in jail before trial for most misdemeanors. ‍

MONEY bail is unfair: Under the current money bail system, if you can afford to pay bail, you go free until your trial. If you can’t afford bail, you must stay in jail. So, the rich can go free, even when accused of serious violent crimes, while the poor stay in jail even when innocent or accused of low-level nonviolent offenses. Money bail doesn’t make us safer, and it results in gross injustice.Just one example, senior citizen Kenneth Humphrey was accused of stealing $5 and a bottle of cologne. He was forced to wait in jail nearly a year before his court date, not because he was dangerous, but because he couldn’t pay bail. A California appellate court ruled Mr. Humphrey was “imprisoned solely due to poverty.” Unfortunately, there are thousands of these stories.

Money bail is unsafe: Proposition 25 means decisions will be based on risk to our safety, not a person’s ability to pay. Judges will determine whether a person poses a risk of committing new crimes or fleeing when deciding who is held pretrial—decisions won’t be made based on the size of the person’s wallet. Proposition 25 makes our communities safer by ensuring jail space is reserved for those who are actually dangerous and shouldn’t be released, instead of the poor.

Eliminates the right of bail for every Californian: California’s justice system guarantees that people accused of a non-violent crime have the choice of securing their release by posting bail or by order of a judge. But Prop. 25 replaces this right with an automated system of computer generated predictive modeling based on mathematical algorithms administered by 58 different counties. Read why civil rights leaders, law enforcement, victims’ rights groups and county officials all say NO on Prop. 25.

Makes communities less safe: California’s experiment with “zero bail” during the coronavirus pandemic had disastrous results as many. defendants were arrested—released back on the streets and committed new crimes within hours—and then rearrested the same day. Prop. 25 will make “zero bail”permanent, which is why law enforcement throughout the state oppose it.

Who is funding Proposition 25?

For updated funding information, including contributions made in support and opposition to Proposition 25, the disclosure reports are available at the California Secretary of State’s website.

Who is Supporting Proposition 25?‍

Lenore Anderson, president for the Californians for Safety and Justice

Heidi Strunk, president of the Mental Health America of California‍

Who is Opposing Proposition 25?‍

Alice Huffman, president of the California State Conference of the NAACP

For more information, go to ballotpedia.org.

‍Have an opinion on this ballot measure? Share your thoughts in a written or video commentary! Email it to [email protected]